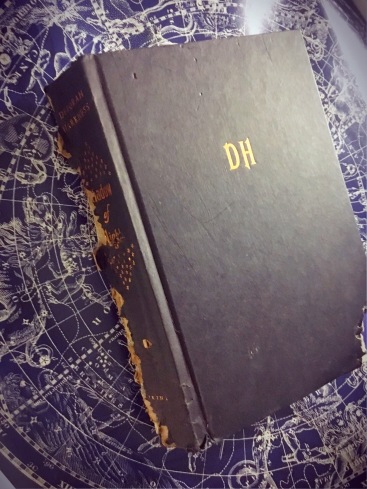 Book(s): All Souls Trilogy (Discovery of Witches, Shadow of Night, The Book of Life)

This review is intended for readers who have not picked it up yet. Therefore, the focus is on the sweeping themes and plot with the intention to leave out spoilers to the best of my ability.

I picked this series up on a whim during a walk through of Barnes and Noble’s Bargain section years ago. In light of the series upcoming TV debut and the release of her spin off novel in September, I thought it would be a perfect time to rebirth my book reviews with this series. It is one I grew emotionally attached to, and am happy to see it’s being carried on. This book is definitely a must read for anyone who wants grown up, real world saturated, Harry Potter.

The trilogy chronicles the lives of Matthew, a vampire, and Diana, a witch, as they search for the origin of their mutations. It doesn’t take long for attraction to take root and quickly they are fighting for the preservation of their lives and “interracial” relationship in a community separated by their differences. Time travel, false identities, and family feuds follow suit. Diana hones her skill in alchemy and spellcasting while Matthew mysteriously and subtly cleans up her messes in order to ensure her continued journey to understanding how his science study of creature mutation involves the two of them. Soon the Congregation that keeps the peace is asking for the pair to present what information they have acquired. Nothing is as peaceful and friendly as it seems. Family is broken, battered, and lost in between. New life is created in unimaginable circumstances. Origin revealing books are transformed and everyone is fighting to understand a power that has too long lived in fear.

I am a huge historical fiction fan, and anything witchy. Though I’ve grown to love full fledged fantasy in more recent years, I felt this trilogy has the perfect amount of realism. It makes you want to know how the “magically inclined” could possibly be very real. The writing is intelligent and deeply inspired by the author’s own knowledge of history. The relationships between all of the characters are complicated, imperfect, and relatable. The magical realism is powerful and imaginative; never growing lackluster in spite of a sometimes drawn out plot.

Readers who are heavy on romantic plots will love this book until the end. If however, you are more like me, and have a burning desire to settle the answer of how these humans adopted their mutations and what Ashmole 782 actually says, you will be sorely disappointed. The detailed experiences spent back in time carried me through the second book since I am a huge history nerd, but I knew others who were lost by its drawn out plot. I feel like the audience who would best love this are fantasy readers who are heavily influenced by love and relationships.

main these or argument: Though the surface plot runs towards the answer of creature origins, the overlying purpose to the book is of love; romantic and otherwise. Family has a strong current throughout the ups and downs of this trilogy as well, preaching not so subtly that family and acceptance of differences are more important than anything else.

support of argument: I think the overlying message the author wanted to communicate was strong and at times suffocated the surface story, which seemed in the end, to be forgotten.

understanding the subject: Harkness has an undying passion for history and it is boldly shown throughout the series. I absolutely love this about her. I delighted in the detailed recounting of Victorian London, and her dabbling expertise in the subject of alchemy. As a woman well lived, her perspectives on relationships and family in particular are well appreciated; there is a soulfulness to her characters because of this. Readers can find them relatable and easy to fall in love with.

From a writer’s perspective, I think I was disappointed that she let the romance overshadow some of the most unique parts of her plot. I thought the entire idea of Ashmole 782 and a science based explanation for creature mutations was so genius, and I was disappointed that she didn’t push to see that through in the end. I almost felt like there should have been a fourth book or an epilogue; something. Her writing is impressive and admirable to a someone like me, and by no means want to diminish the craftsmanship of her creation. Had I gone into this trilogy more interested in the relationship between Diana and Matthew, I would not have a single hang up. To this day, I think Matthew Clairmont is one of my all time favorite characters. Perhaps he was her “darling” too. I wouldn’t blame her!